Myth or magic: does toast always land butter side down? 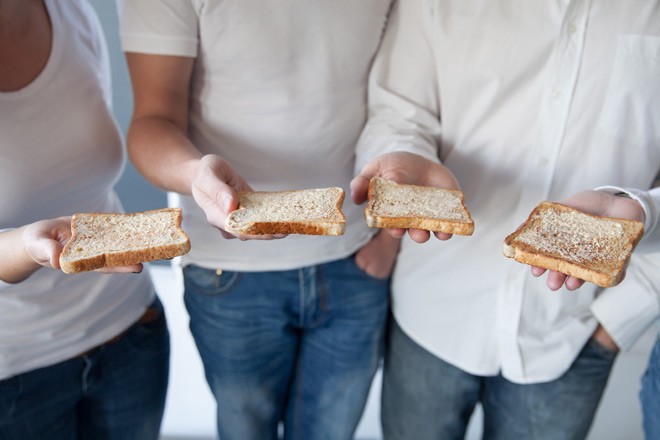 What is it with toast that always causes it to land with it’s beautifully buttered face flat on the floor? Is it a myth or is it magic? We decided to investigate the flip side of this kitchen conundrum.

While we knew deep down inside that it was all rather rhetorical because very few things concerning food seem to apply to ‘always’ rules, we had to make this a fair test. Here’s what we used:

1 loaf of regular toast bread — did you know that on average a slice of bread weighs 28g?
1 ciabatta — just in case this myth favours geometry
Enough butter to get liberal on the spreading

For the first round we handed out four slices of toast weighing 28g each with 4g of butter and strict orders to butter the toast and toss it into the air. We watched as the toast fell. We repeated this twice. Two out of three times, three of the slices landed butter side up, the third throw yielded the exact opposite. Much like a coin toss.

Then we decided to slap on a whole lot of extra butter, about 10g per slice. See how heavy those slices are? Maybe, we thought, it had to do with increasing the weight on the one side.

Again, out of three throws, whether simply dropping, throwing them high or haphazardly bumping into each other, sending slices flying, the results were much of a muchness, with the butter facing up more often than not.

Enter the toasted ciabatta. Now to put the type of bread to the test. Again, the slices fell either butter side up or even stevens.

The crux behind this myth is the philosophy that if anything can go wrong it will — coined by Mr Murphy.

So what did we conclude? Well, either we busted Mr Murphy’s myth or the folk here at Yuppiechef HQ just don’t know how to drop their toast. It had us wondering though, if you smeared some butter on the back of your cat — what would win? The old wives tale or the flying mechanics of a spiralling feline?

Article originally written for and published on Yuppiechef.com as part of a light-hearted mini series series I conceptualised on testing kitchen commonalities in a very non scientific way.

Other fun reads in the series: