Why Beer is Better 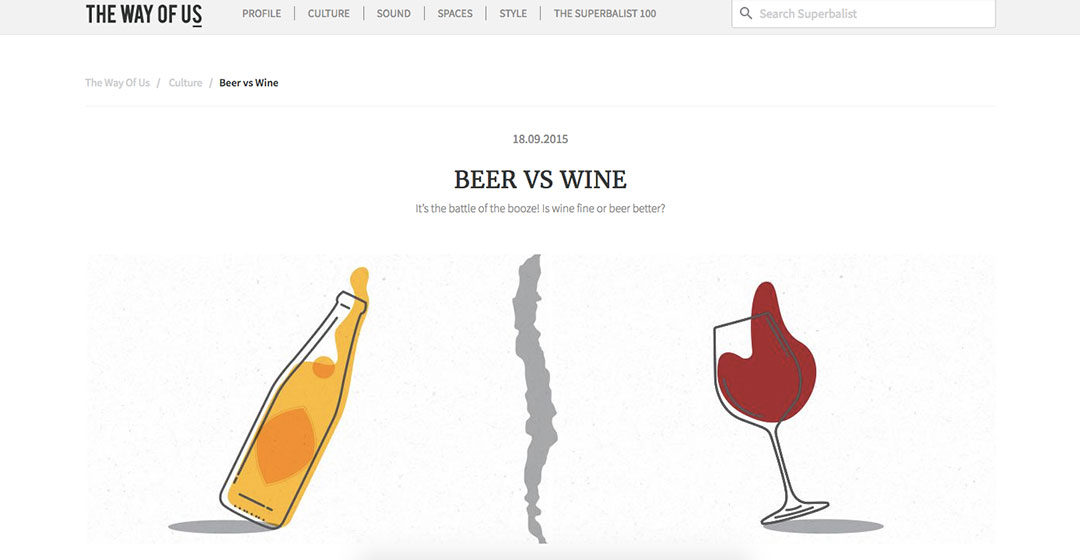 I was approached to write the argument for why beer is better for the Superbalist Beer vs Wine debate in The Way of Us while heading up the League of Beers crafty content. They wanted a woman’s opinion who actually drank beer. This is what they got.

“If she prefers beer over red wine and bonfires over candlelight, she’s a keeper” – sang a country singer named Earl once. Everyone loves bonfires so let’s move on to why I prefer beer.

Wine is uppercrust, pondering philosophical prose. It divides the room in two halves – those who ‘know’ – and the quiet ones. They linger on the sidelines, trembling with fear of mispronunciation and misidentification. Petit verdot, mouvedres, viognier – say what? Beer is every man’s drink. Pilsner, lager, ale or stout? Beer is easier to order, identify – and rhyme with when you’ve had a few.

As a generous glass after a disheartening day or as a constant cooking companion, sure I’ll have wine. The solitudinal, sombre friend who numbs the loud noises, lulling your psyche into ignorant bliss. But where there’s wisdom and sedation in wine, there’s freedom in beer. But surprisingly beer also helps you sleep better. Docs everywhere recommend hops for sleeplessness, anxiety and awkward moments chatting up the token hottie.

Beer-boep? Yes, beer is thought to be higher in carbs (not strictly a rule of thumb) but if you’re drinking craft (like any good person should) you’re also getting a drink laced with good guys like vitamin B, niacin, protein, folate and antioxidants, not to mention water. You’re practically getting a hydrating meal.

Beer drinking also makes you rowdy and rowdy people are the ones running down the street with pants on their heads, bush diving into unsuspecting sidewalk shrubbery, while trying to keep their beer tower in tact. What does a wine drinker have to show for their day of patriotic dedication?

Beer is humble. You could brew your own batch at home. No acres of mountainous hillside required. Just a shed and nimble ability to dodge exploding bottles. See? Beer keeps you fit.

With beer you can err towards the uncouth and swig straight from the bottle and it still tastes delicious. Wine would never have it. Beer doesn’t ask you to pre-pour it, tapping your fingers while it breathes. It’s simply there for you, chilled – ready to make life better.

Beer is spontaneous. You don’t need a bottle opener to crack open a cold one. Keys, a tent peg or eyeball socket will do just fine.

But to a German gal, prior to Oktoberfest, it’s just gotta be beer. Craft beer!

Craft is camaraderie, crazy tall tales about brewers saying f**k it to the norm. Craft is a journey, an experience not an occasion. When I started drinking craft I was a Honey Blonde girl. Somewhere in between the frivolity of fruit beers, the raucous laughter of lager and the intermittent IPAs, my taste buds stretched to appreciate the full spectrum.

A love of craft allows you to walk into your favourite watering hole and have the bartender say, “Can I pour you the usual, love?” It’s the gentle carbonation of life’s humdrum, the silly, mustache-y kiss from a perfectly foamy head.

But the absolute best thing about beer? It’s never once tried to be the superior drink.

This piece was originally written for and published on Superbalist.com